Barrier film is used to seal the silage clamp as tightly as possible against entry of oxygen. It is a thin, transparent film which clings to the forage by suction and excludes most of the oxygen as soon as it is installed. This is good for the fermentation process and helps to maintain a good top layer. 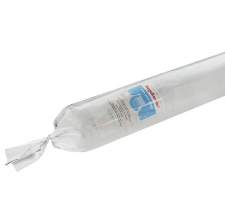 The tensile strength of the barrier film is really put to the test when covering the clamp in a high wind. It can be very frustrating if the film tears quickly or doesn’t stay in place under the plastic sheeting. This affects the forage quality.

MegaBarrier barrier film has a high tensile strength, almost identical to plastic sheeting. It is known as an oxygen barrier. This barrier film is highly impermeable, so very little oxygen can enter the clamp. Using a standard barrier film makes a noticeable difference.